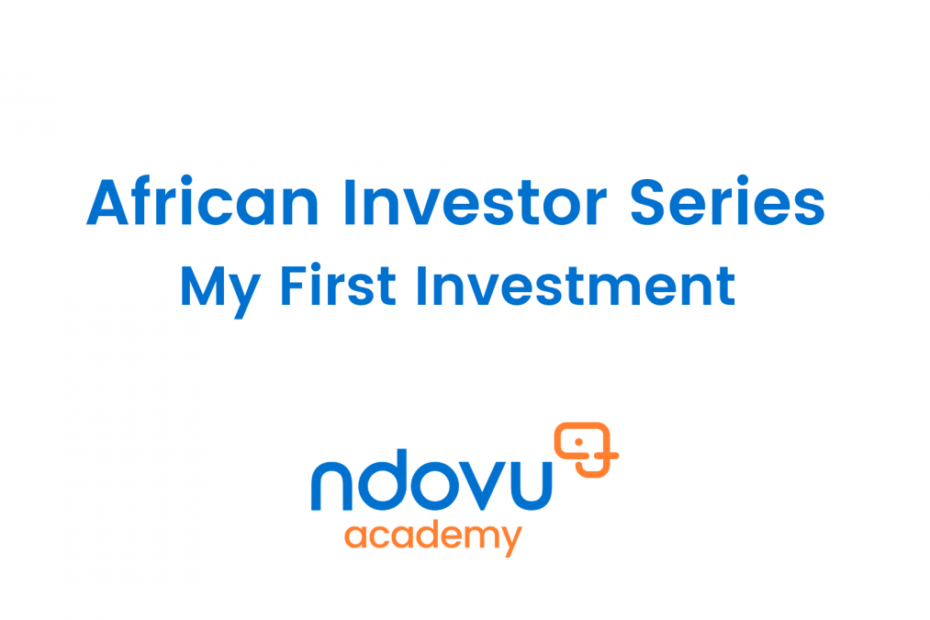 Welcome to a Ndovu Academy Blog series on investments by an African investor. We tell the stories of different private investors on the African continent and the first investment they made so we can all learn something through their experiences.. We hope this series will be informative, eye-opening, and give you something to think about! For more stories, go to https://ndovu.co/blog . This week we feature Dean, Head of Marketing at Ndovu. Ndovu is an African Investment Platform that allows African investors to invest in both local and global financial markets.

My first investment was four thousand Kenya shillings. About 40 dollars. I have always wanted to make and invest money since childhood. from running small businesses like selling snacks, jewellery& toys. Making the money was possible but becoming an investor was a whole other ballgame. Like most investors, it took quite a long journey before putting down this first amount. A lot of research, thinking, debating and a perfect opportunity led to this. I invested this $40 in 2017, just after the announcement of the election rerun in Kenya. We had been on the cusp of an incumbent leader winning their second term. It was a very hot political time (I promise these political references will make sense) and the country was desperate for a return to normalcy.

I was extremely unhappy with myself and experienced a large amount of FOMO (Fear of Missing Out). Why? I had missed a large investing opportunity. In the lead-up to the election, it seemed almost certain that Uhuru Kenyatta would (continue to) be the next president of Kenya. While election turnout wasn’t the largest, he won by a healthy margin. As is the case across Africa (and apparently the bastion of democracy, USA) the election result was disputed. A week-long Supreme Court case ensued, was considered to be a mere formality, a small speed bump in Uhuru Kenyatta’s victory.

It came as a monumental surprise that the judges called for a rerun of the election. So heavy was the surprise that the Nairobi Stock exchange lost about 92 billion Kenya shillings due to investors selling their holdings in these companies. The exchange was down so fast that trading was stopped to reduce the loss to the investors. For a full 30 minutes, which rarely happens in the Kenyan financial system. My favorite companies were on a steep discount! And thus came my FOMO. I wished I had started to invest at least 4 months earlier, got a broker, and would have been primed for the opportunity. But I wasn’t. So in consolation, I searched for an alternative.

M-Akiba is a government-backed bond. What’s a bond? You give the government a loan and they pay you an agreed interest rate on this loan every week/month / 6 months / 1 year depending on the bond. They use this money for infrastructure projects like building roads, dams bridges etc. Then they pay back the full amount of the loan at the end of the agreed time. It is the least risky investment there is. Why? Because the government must always pay its debts (cough Lannisters cough). I purchased the M-Akiba bond for 4,000 kshs (just slightly above the minimum of 3,000 kshs ($30)) in August 2017. Later, I invested a larger amount, 46,000 kshs ($460) into M-Akiba. This brought my total to 50,000 kshs ($500). The interest was 10% every year, meaning I would get 5,000 kshs ($50) every year.

The actual initial interest & financial benefit was minimal but it was a jumping-in-the-ocean moment where I got some experience, a literal ton of information & understood the investment journey. From understanding what a “fixed coupon rate of 10 percent” means (the coupon rate is the annual income an investor can expect to receive while holding a particular bond) to understanding my investment style & my appetite for risk vs reward. As Benjamin Franklin “An investment in knowledge always pays the best interest.”

Hi African investor! Yes you! What was your first investment? It could be a few shillings saved in a savings account that should make you some extra money, buying a motorbike / vehicle to ferry items with or even purchasing a small plot of land. Want to be featured in this series? Please shoot us an email on hi@ndovu.co .